Being of tribal heritage, I'm not as sold on guns as the average American.  I absolutely believe in the 2nd Amendment, and I am delighted to see the tradition of hunting remain in our society, even if no longer mainstream.  When I watch professed believers speak of hording ammo and stock piling weapons, I get a very uneasy queasy feeling.  Here on this preservation, I don't want to invite that kind of "faith in firepower."

In this time of uncertainty and world of confusion, I know three things beyond a shadow of a doubt.
First,  I know is Y'hshuwah is coming back, but things are going to get messy, very messy before that happens.

Y'hshuwah said to be ready, but he never said, to scare anyone into "prepping."  I figure I'm supposed to be ready to help folks who didn't know to be ready.  Perhaps many would disagree with me here, but the more I read Scripture the more sure I am that when we are spiritually prepared, we'll have the provision and protection we need.  We won't be slovenly in our preparedness, nor will we put our trust in weapons.  One of the first Bible lessons anyone learns as a child is the account of David and Goliath.   David stood on faith, and ended up using Goliath's own weapon on him.  Something to think about . . .

Believers aren't called to "drop out," nor are we instructed to hide behind an arsenal, armed to the teeth.  We are told to be set apart and willing vessels.

Wherefore come out from among them, and be ye separate, says Elohim, and touch not the unclean thing; and I will receive you,  And will be a Father unto you, and ye shall be my sons and daughters, says El Shaddai.


Posted by K D Elizabeth at 5:20 PM No comments: Links to this post

This has not been an easy lesson for me.  I'm great with not fixing something, if it's not broke . . . but when something isn't working right, I keep working at it, and sometimes we just have to accept, it's not going to be right according to our own personal vision.  As I have found, sometimes the harder I try the worse it gets.

Now, upon acceptance of that fact, circumstances can unfold in primarily two different ways, although if it involves people and relationships, I'm sure there's four ways.  Back to acceptance.  Some things are simply beyond repair and we must either replace them or learn to do without them.  People and relationships aren't like power tools, though, so when it comes to people, we have a different sort of acceptance required.

Whether it's too many rocks in a garden or too many burnt bridges, sometimes it's best to just change our own plan.  Sometimes acceptance is more important than fixing.  As I'm watching the various ways other folks organize or reach out to each other, I'm seeing, when YHWH is in the plans, HE's the one who brings the working parts together, be that garden spots or community plans.

Sometimes our fixin' amounts to digging the hole deeper, in which case, we need to simply lay down the shovel.
Posted by K D Elizabeth at 4:54 PM 1 comment: Links to this post

I truly believe somewhere in the heart of man, the need for freedom remains.  The longing for a companion, a helpmeet is also placed in his heart by his Creator, but at some point in our culture, it became bondage that we as a society have avoided.  Sadly, we missed the real point and didn't honor the Instructions of our Creator.  So we've produced a culture of free sex, rather than a true sanctified marriage, which by virtue of separation of church and state, should not involve the government.

Marriage licenses just came about recently, historically speaking.  I now see spiritually what we did.  There is an absolute resolve in humanity to not surrender to an abuse or illegitimate authority, but we went the wrong way.  It makes perfect sense to not need a license or permit to engage in what our Creator ordained.   Marriage licenses and birth certificates are basically pretty new to the generation that brought the boomers.

My great grandpa didn't have a birth certificate, and my grandparents didn't need a marriage license.  There were witnesses and celebrations at events, not government certification.  Then there was the generation who made things "right" by lying their way through.  Many teenagers eloped with license in hand and lied about their age.  I have no idea how legal that is, in the long term, but I'm guessing social security gives them a bit of grief over it.  Then we got to the boomers.  The generation of divorce, remarriage, and never mind, we'll just see how it all works out.

We then raised a generation who goes ahead and makes babies, but will tell you, they don't want to "rush into marriage."  That has resulted in total government control over the couple and their child, and the couple doesn't even have the benefit of the license, or certificate.  In three generations, we've gone from being people because our Creator said we were, to being a commodity with permission to breathe and procreate, to simply being adult wards of the state caring for minor wards of the state.

Isaiah 42:8 tells us:  YHWH shares His glory with no one.  We traded the blessing of marriage and the heritage of children for permission to live in licensed containment.  Since marriage and procreation is our Creator's plan and idea, it's time to return to witnessing and celebrating weddings and births and simply writing the dates and names in the family Bible!
Posted by K D Elizabeth at 4:57 PM No comments: Links to this post

Not Knowing, but Appreciating

At one time, I actually envisioned the Chevy Uplander filled with members of the community heading to town or the auction or what have you, but together and conserving.  I've since realized there are a few barriers and a bit of idealism on my part that needed to be eliminated.  I had truly hoped that this community and land venture would develop more rapidly than it is, but that was shortsighted immaturity on my part.  It was tempting to compromise, but thankfully, that was taken out of my hands and finalized.

I've also realized, in one area, much like Abraham, I was adding my own idea to the vision.  That didn't work for him and it didn't work for me.  I have to shoulder a bit more responsibility of blame, in that I had the advantage of being able to learn from his mistake, but . . . sadly took the time to repeat his mistake.  I take solace in considering I am not as important in world events as he was.

I was blessed upon my repentance to get to enjoy one member of the tribe this year.  She and I had a wonderful time together, and I must proudly mention again, she was a wonderful guest contributor to the Goshen Gazette.  I hadn't been to a goat auction in quite awhile.  It was just a sad memory from last year and to be honest, I just preferred to put it behind me, but she wanted to go.

YHWH blessed our endeavor above what I could ask or imagine.  We have two beautiful new members of the herd and we have replaced the sad memories of last year by establishing a new good memory of the Goat Auction.  I am now realizing, this community isn't going to be like I first envisioned, it's going to be so much better!

By faith Abraham, when he was called to go out into a place which he should after receive for an inheritance, obeyed; and he went out, not knowing whither he went.  By faith he sojourned in the land of promise, as in a strange country, dwelling in tabernacles with Isaac and Jacob, the heirs with him of the same promise:  book of Hebrews 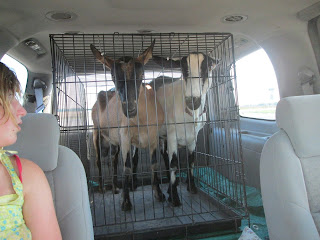 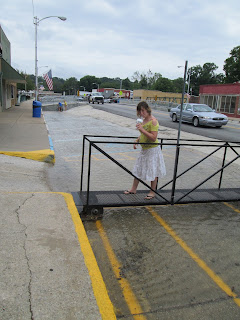 Posted by K D Elizabeth at 5:04 PM No comments: Links to this post