Being of tribal descent, this time of year can be very trying.  I certainly don't want to sound like Oprah and say everyone who disagrees with a person of ethnicity is racist, because well that is painting with just too broad a brush.  Racism comes in all colors, including brown and black.  I guess to offer variegation to a frequently used phrase, "Some of my best friends are white."  That doesn't change our history, however; nor do they owe reparation.  I do know what Native Americans have gone through to be considered humans in the country that was first ours, but I didn't pay that price, I just do some mouthing.  I am also aware of some of the atrocities that were inflicted upon my ancestors, but no one alive today did that.

I don't choose to celebrate a day when unchecked immigrants changed the culture of my people, after being kept alive by my people.  Seems a bit more than ungrateful, to say the least, but that was a long time ago.  I don't need to carry an old grudge to not participate in a celebration that doesn't evoke a celebratory concept.  I have dealt with those of European blue blood ancestry and to be honest, "Little Big Horn" is a fond image . . . but I digress.

I did find an interesting passage in Scripture in which Jeroboam made a celebration of his own choosing in the eighth month, which does align with November most years.  He even incorporated the images of calves in the celebration.  I can't help but wonder, since calves were being honored, if some sort of fowl was not the main dish, but that is only a question of my own thoughts, nothing to confirm.  Scripture very clearly states that this day of celebration was of Jeroboam's choosing, and not a Set Apart Holy Day.


I'd urge you to read in I Kings 12 and 13.  Jeroboam is listed as one of the kings who did evil in the sight of YHWH.  Besides this year, Hanukkah celebration is to begin this week!  So technically, this year Thanksgiving is not taking place in the eighth month on the Biblical calendar.  Not to insist that others embrace ancient tribal ways; but I'm still brown and not terribly thankful for the loss of my culture.


Posted by K D Elizabeth at 6:08 PM No comments: Links to this post

The Cost of Compromise

Sometimes we persevere the wrong direction and we endure unnecessarily, and sometimes obedience involves just starting over after the repentance.  Compromise is expensive, in the overall grand scheme of life, and YHWH calls it mixing holy with profane, which is very displeasing to Him.

As I walk through the preservation at chore time, I see all the improvements that YHWH has allowed to take place.  Some of the ideas that have come to fruition are just truly heart warming, and some of the ideas had to be scratched, or even worse "blew up in my face."  The ones that blew up though, were always built on a foundation of compromise . . . mine.  The blow ups were consistent, regardless of the parties participating . . . Once I refused to concede, the war was on.   The deal is, though, this is the place YHWH brought me to tend, so I can only accommodate so far before it becomes obvious that this just isn't the place for whatever the visitors have in mind.  That's why I felt so strongly about writing a short note to Benjamin Netanyahu, telling him to hold that ground and make no more concessions.  Concessions are just like drinks in AA.  One is too many and a thousand will never be enough . . .

Compromise isn't really about the other party at all, it's about a lack of faith and the condition of our own heart!  Compromise basically comes about for two reasons.  One, we just plain want something and justify and rationalize. Two, we think G-d can't pull it off without our amazing skills of concession!   Either way, it's about seating self on the throne of the heart!  Just an aside here, I have definitely determined that life is so much better, when self is dethroned.  If we belong to YHWH but don't surrender to His plan; just as with ancient Israel, He will use our enemies to get our attention!  Often we're already playing the compromise and concession plan with the very enemy He'll use.

Concession is agreeing to give something for nothing, it's not a trade, it's not a negotiation.  Concession is giving something that is rightfully yours or maybe not rightfully, but it involves giving it to someone who has no right to it!  Compromise on the other hand can be a bit more subtle.  Compromise is giving thanks and asking for a blessing over a kosher meal when you've invited the devil to dinner!


Posted by K D Elizabeth at 4:54 PM No comments: Links to this post

Last week I showed two photographs side by side, taken two days apart of the same trees.  This morning I snapped another photograph, marking the difference of a week, between the second and third images. A friend made a comment the other day referring to the beauty of autumn was really a result of the leaves dying.  At the moment I heard that, a heaviness washed over me.  I knew what he had stated was true, but I didn't need to hear it while I was enjoying the splendor of autumn!   It was then that the foundation was laid for how we sometimes prefer the facts to remain distant from the beauty we are enjoying.  Although this is the natural cycle for trees, Adonai gave me a parable addressing compromise, based upon these three photos.

If I went out one morning to do chores and saw these trees just cut down or blazing, I of course would see no beauty in that, but we know from Genesis, Eve saw beauty in that tree at harvest time.  Hebrews tells us that sin is pleasurable for a season.  John, in his first letter referred to the lust of the eyes, which means temptation can appear to be quite beautiful.  Unlike Eve's situation, there was no fruit in this parable, just the the distinct fact that the changing colors was caused by the absence of life flowing from the root through the branches.   That's exactly what happens to us spiritually when we find temptation to be alluring. 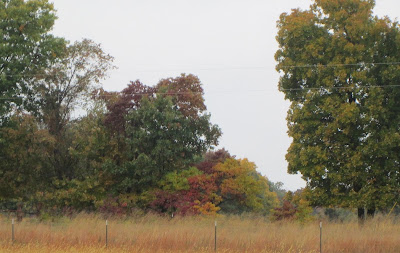 Compromise cuts the flow from the root to branches.  It doesn't happen all at once, and at first the compromise seems "doable!"  It may even seem like a good idea.  The compromise is just a small one, just making life a bit more "colorful," and the change is barely noticeable.  Sometimes we can even convince ourselves we are more useful in our compromise.   More outstanding in our message if we mingle the truth with the atmosphere.  We tell ourselves the contrast will be obvious and others will find what we have to be desirable . . . 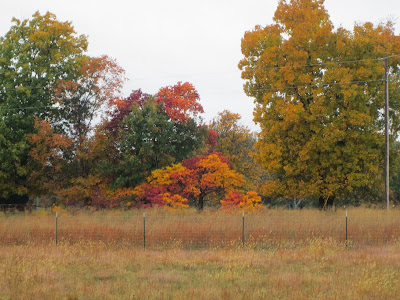 This photo was taken on October 31st, as the discussions and debates raged as to the participation of the holiday.  The plans and admonition regarding the potential outreach, the cuteness of some costumes, and the attempts to offer kids an alternative went on and on.  These colors are so breathtakingly beautiful, it's hard to remember that it is the lack of life flowing from the roots to the leaves that causes this.

Now, just one week later, the vibrance has faded.  The splendor the color is gone.  The evidence of dormancy is becoming obvious, and so quickly.  Not only have the leaves faded, they've become hard and brittle; many have fallen away. 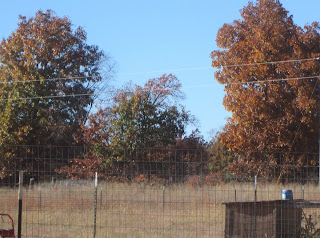 The season of autumn beauty is already fading.  For the trees, it's merely a natural change for a season.   As for we humans, we often do not see the subtle changes brought about in our life, by compromise, until the color has completely faded and we find ourselves in dormant desolation.
Posted by K D Elizabeth at 5:26 PM No comments: Links to this post

This time of year just gets crazy.  The anti-holiday season was officially declared right after Sukkot.  It seems for a month before Halloween, the religious world draws their line in the sand, then discusses how they can affect all those who are still participating.  What they actually end up doing is sharing the same information ad infinitum with the people who are already not participating.

I remember coming out of traditional religion, and it seemed when people asked me what I believed, my beliefs were defined by what I no longer believed.  I try to be patient with folks who are just now going through that as well, but with social media, seems everyone is now a pastor or rabbi.  What I've truly noticed is I can usually tell which denomination or tradition the person claims to have come out of, by their continued fervor with their new information.  Often it seems our faith is based upon our own perspective, rather than the truth of the Word of G-d.

I've suddenly got friend requests from the same people who unfriended me last year over Jeremiah 10:3, 4 and the Christmas tree.  While the Thanksgiving debate is about to gear up, I have to admit, my Thanksgiving perspective only has a single Scriptural reference, so technically that's not based upon the two witness requirement of Torah.  My perspective of Thanksgiving is based more upon the same argument the Americans of European descent have now regarding brown immigrants.  As an original brown inhabitant, I am well aware of the fact, feeding and seeing to the need of immigrants will definitely change the culture of a society . . .  History has already proven it!

I no longer define myself by what I "don't believe."  Life is just too full of sharing and doing what I do believe!  Rather than endure, enjoy, or energize the seasonal debates, I believe and highly recommend that we just "come out from among them and be separate."  I'm not talking about hiding, I'm talking about not focusing on the hubbub.  I'm going to focus on what and Whom I do believe in!  If someone has question or comment, they do make it known!
Posted by K D Elizabeth at 6:45 PM No comments: Links to this post