There is a moment every year, to which I spend about 3 months in anticipation.  Sounds dramatic?  It's more than that and it only happens once a year.  Toward the end of January, I get out my seed stash.  I plant the bedding plants in the greenhouse, such as tomatoes and peppers.  Everything that I want to be already growing by the last frost, gets growing in the greenhouse.  Then, with great care, I choose the seeds for early planting and begin to organize the garden plans.

This is more than just gardening, though, this is truly part of my call to ministry.  When the garden season gets under way, I'll have information to share, as well as produce, if YHWH blesses me with rainfall.  Every year when this "ritual" begins, I am reminded that I've been redeemed back to the garden.  By the grace shown at Calvary brought by Messiah, we can have access back to the Father.  As this world continues to move farther away from G-d and His Word, I take this task quite seriously.  Our society is no longer agriculturally based, but humanity still needs food.  Messiah's last words recorded specifically to Peter were to feed His sheep.

It is my belief that many are going to be caught unawares as the end of days continue to gain momentum, and I have been led to establish this place for followers of The Way to gather.  Each spring, I don't hope for the tribulation, I pray for the opportunity to share gardening tips, give encouragement to first time gardeners, and share reminiscences with some who are choosing to return to simplicity.   Not to mention, gardening really is therapeutic!  And so, by mid February the corner of my counter bar is covered in seed envelopes from the year before, the tiller is primed and ready, and the first sunny day after the 14th is designated "the special day."

I've done my first gardening of the year wearing a coat, but not often.  I have a system now that is working well and I'll explain it in "Grocery Underground."  Meanwhile, February 17, 2014 was the day for the greatly anticipated "Moment."  I headed out to the garden spot, sporting short sleeves and sandals, fired up the tiller and made the first round.  Then the moment . . . when I slip off my sandals and stand in the cool freshly tilled soil and simply say Thank you to my Heavenly Father! 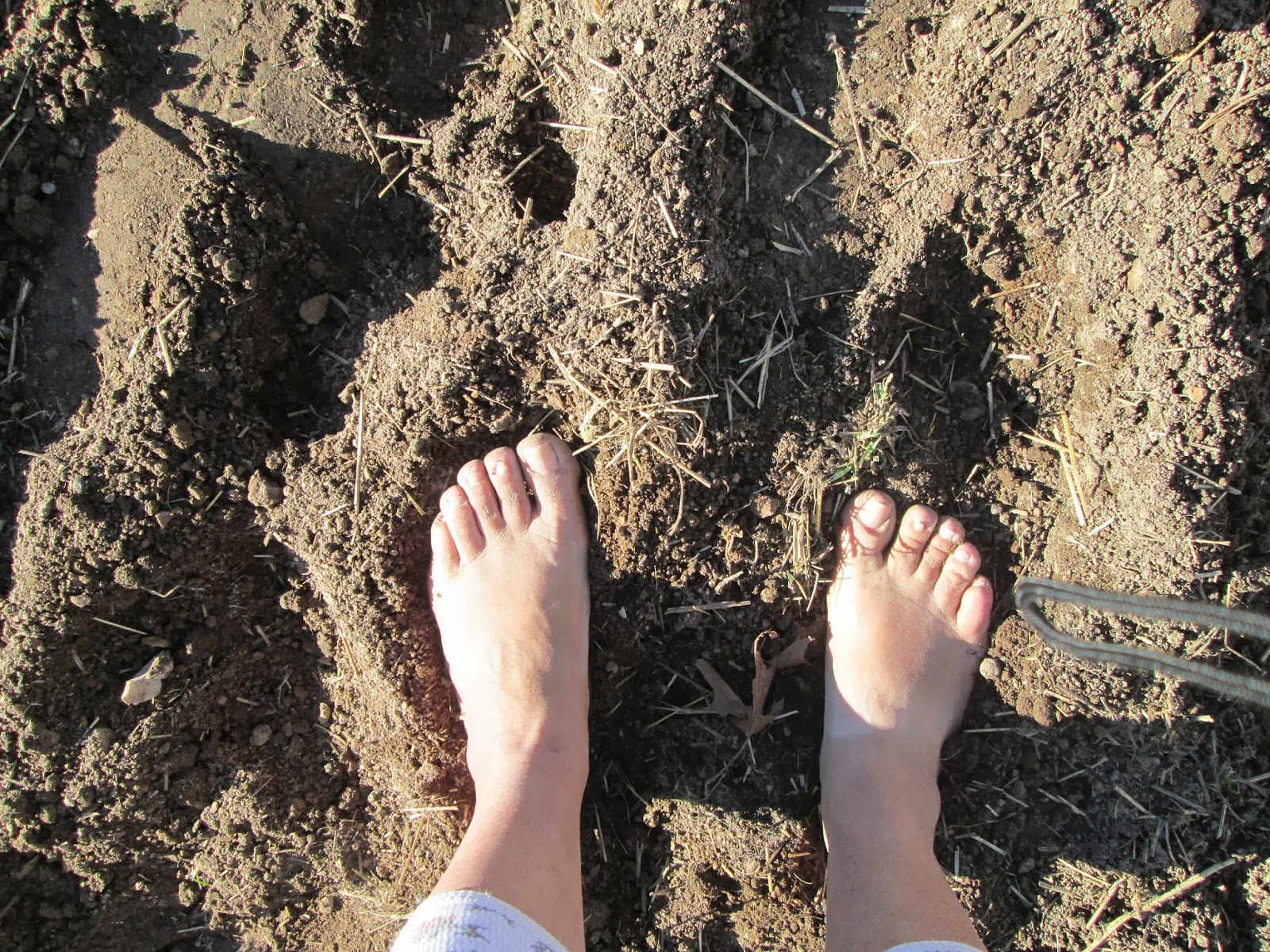 That moment is euphoric yet cathartic.  I feel the doldrums of winter just literally leave my mind and body, while I soak in the sunshine and my feet feel the dust of the earth, from which we were formed.  That moment is the point of time in the year in which I feel the glory of heaven while being absolutely a part of the earth.  It's not about creation, it's about our Creator!   The sun, the breeze, the soil, the sound of the animals, everything I am aware of in that moment, was made by our Creator in just one week.  As I bask in the warmth of the sun and stand in that cool soil with feet bare, I am so aware and so thankful I've been allowed the privilege of tending the garden.

And YHWH G-d took the man, and put him into the garden of Eden to dress it and to keep it.  Torah of Holy Scripture
Posted by K D Elizabeth at 7:54 PM No comments:

The Heart of the Matter

As the tension of the end of days continues to mount, it seems the reasons for division rather than unity are increasing.  Differences that were no big deal last Sukkot are now worthy of their own doctrine and denomination . . .  I realize social media can be difficult to actually discern between big ideas, big talk, and practical application, but it is also a wonderful way to meet like minded individuals, and by like-minded, I mean mind of Messiah.

I mentioned a dream in another article, but that's not the only dream I've had this week.  I've had several dreams about people I've come to know through social media.  Now, I'm not saying they are all coming to the Land of Goshen planning to "community up," but I have received a real awareness that this place may serve as a point of connection or refreshment as the end of days continue to unfold.  I have been shown a specified number of residents for this place, but that certainly doesn't mean we are to turn away weary travelers or strangers.

In the dreams of recent nights, there have been some folks who have been seated at the round table of the dining room, while others more formally engaged in conversation in the living room.  A couple of conversations have taken place in my office, and some never gained access past the front gate.  I don't have the place battened down or locked up, but with livestock, fences and gates are a necessity, and as in the case of a couple of dreams, a simple way to reach a resolution.

What seemed so profoundly simple was the interaction in each dream.  Some were simply enjoying fellowship and temporary rest, while others were seeking clear direction or had felt led to come.  Some were here to learn and take the knowledge back to implement where they were called to be and still others were here to "change things."  Hebrews 13:2 has been on my heart and mind since these dreams began.  Be not forgetful to entertain strangers: for thereby some have entertained angels unawares.
Posted by K D Elizabeth at 6:30 PM No comments:

Life Can Be So Different

I've realized in this past couple of weeks just how different life can be, if we live according to Torah.  Now, obviously, since most of society doesn't, that's going to make those who do, quite different, also.  I've had the privilege of walking out many aspects of Scripture, simply because I asked.  I'm not making a big claim to fame here, but rather Scriptural events have just unfolded around me, by the Hand of Elohim.

In another article, I mentioned that I align the homestead by the Hebrew calendar, even the breeding season, in an attempt to avoid the herd birthing through the most critical of weather.  This past week, with the forecast being unseasonably cold, I began checking dates; realizing the kidding season was imminent.  Thank G-d, no kids arrived through those bitter cold days.

Through this, I remembered with a smile, my Jacob moment last fall.  I was down by the pond cutting branches for the sukkah, when Buck and Oreo got frisky . . . Genesis tells us, Jacob had quite the breeding plan by the watering hole with branches.  How delightful to know this was not a one time event.

This event got my wheels turning about other things in our society, as well.  If we were Torah observant, sex education by the public school system would be completely unnecessary.  If we grew up knowing about niddah, the girls would have no need to see "The Movie" as it was euphemised in late elementary school.  If more children were living agriculturally, we certainly would have no use of common core's rendition of "normal and healthy."

Our Creator made everything perfect, and then went to the extra trouble to record the facts and Instructions for us.  He was also gracious enough to document the consequences of those who did heed the warning.  Seems simple enough.  For success in this life, all we have to do read Instructions and enjoy the testimonials . . .
And he set the rods which he had pilled before the flocks in the gutters in the watering troughs when the flocks came to drink, that they should conceive when they came to drink.  Torah of Holy Scripture

Does it seem many are really putting on the emphasis to be ready?  There are signs around us that clearly indicate we need to be preparing, while we are looking up!  Rather than ask for signs, we are called to discern, but even more importantly, keep our eyes on Messiah.  If we are following Him, we won't get off the narrow path.

Every season here on the homestead requires a different kind of preparation.  Scripture tells us "to everything there is a season."  It is my belief that we have been in the harvest season, spiritually, since Messiah said the field was white unto harvest.  I see many are preparing as we come into yet another season.  I feel compelled to definitely sound the warning on behalf of the land.  There are a number of folks sounding other shofars of warning, but my urgency is in regard to the land.

This is the last garden season before the land is to rest.  If YHWH causes the land to rest, with or without our preparation, we could be in for a very rude awakening.   I think my preparation for the new kids arrival gives a very good image of how we are to prepare for tribulation in the end of days, and Messiah's return.

I keep my buck goats away from the herd nine months of the year.  If the two bucks are kept separate from the does, they do not fight and tear up fence continuously.  If they are in with the does, there is a continual competition between them.  They also give the milk a strange whang, so for the milking season, they remain to the north, and the wind is rarely from the north in spring, summer, and early fall.

Now to the preparation.  Since I am aware of the three months the bucks are with the does, I have a general idea of when the kids will arrive.  There is no excuse for me to be "unprepared."  Interestingly I use the Hebrew calendar in breeding and preparation.  I introduce the bucks the day after Yom Teruah and they remain with the does until the end of Hanukkah.  The harshest month of winter, I have no worries, other than cracking ice.  Six weeks after I remove the bucks, I prepare the birthing houses.  That way, the straw isn't over used and worn down, and the houses aren't dirty, and usually the coldest weather of the winter is behind us. 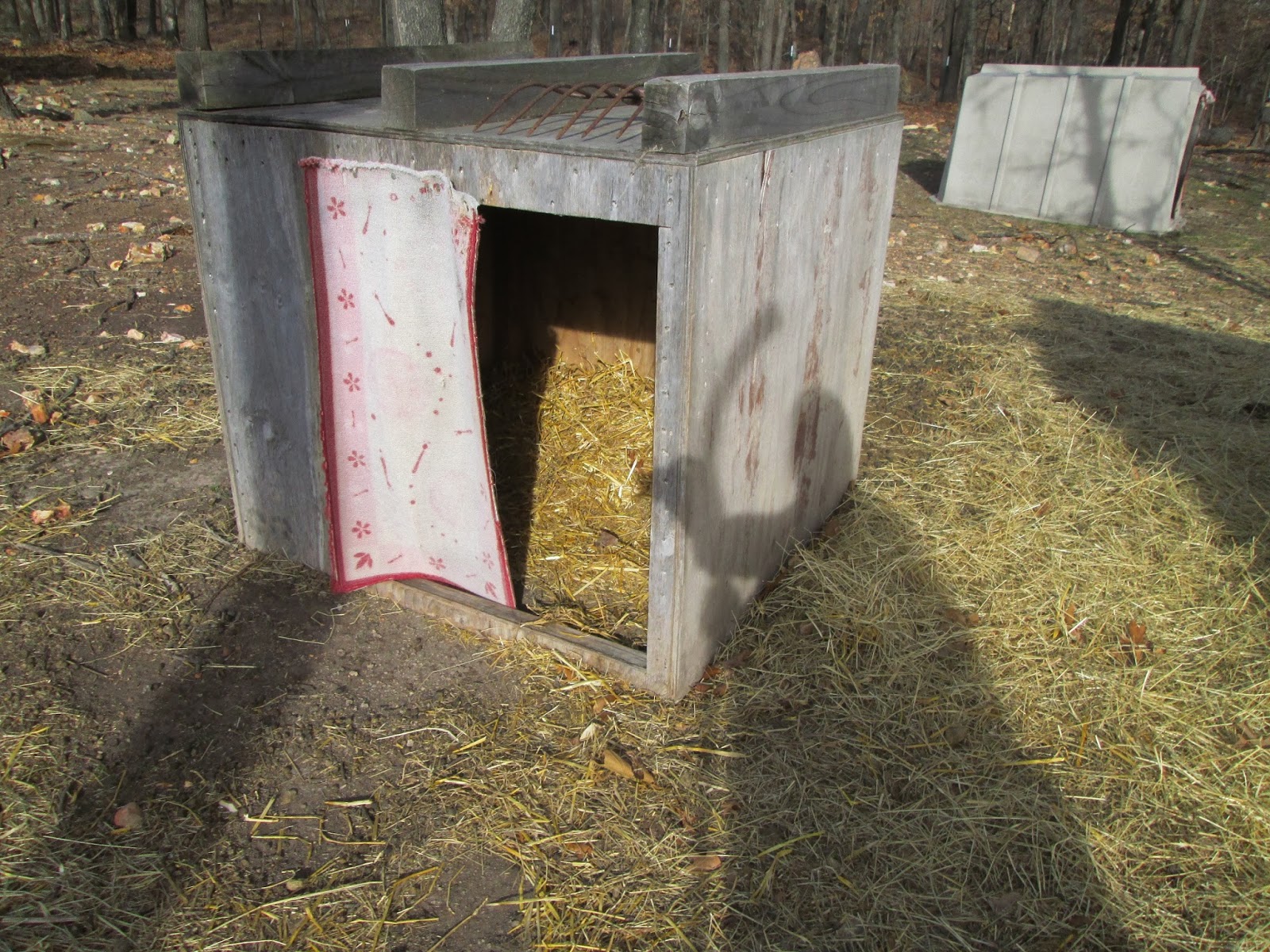 There are enough of these little birthing sheds for each expectant mother to have her own "house."   They are close to the feed and water in both pastures.

Being ready is to have our house in order. 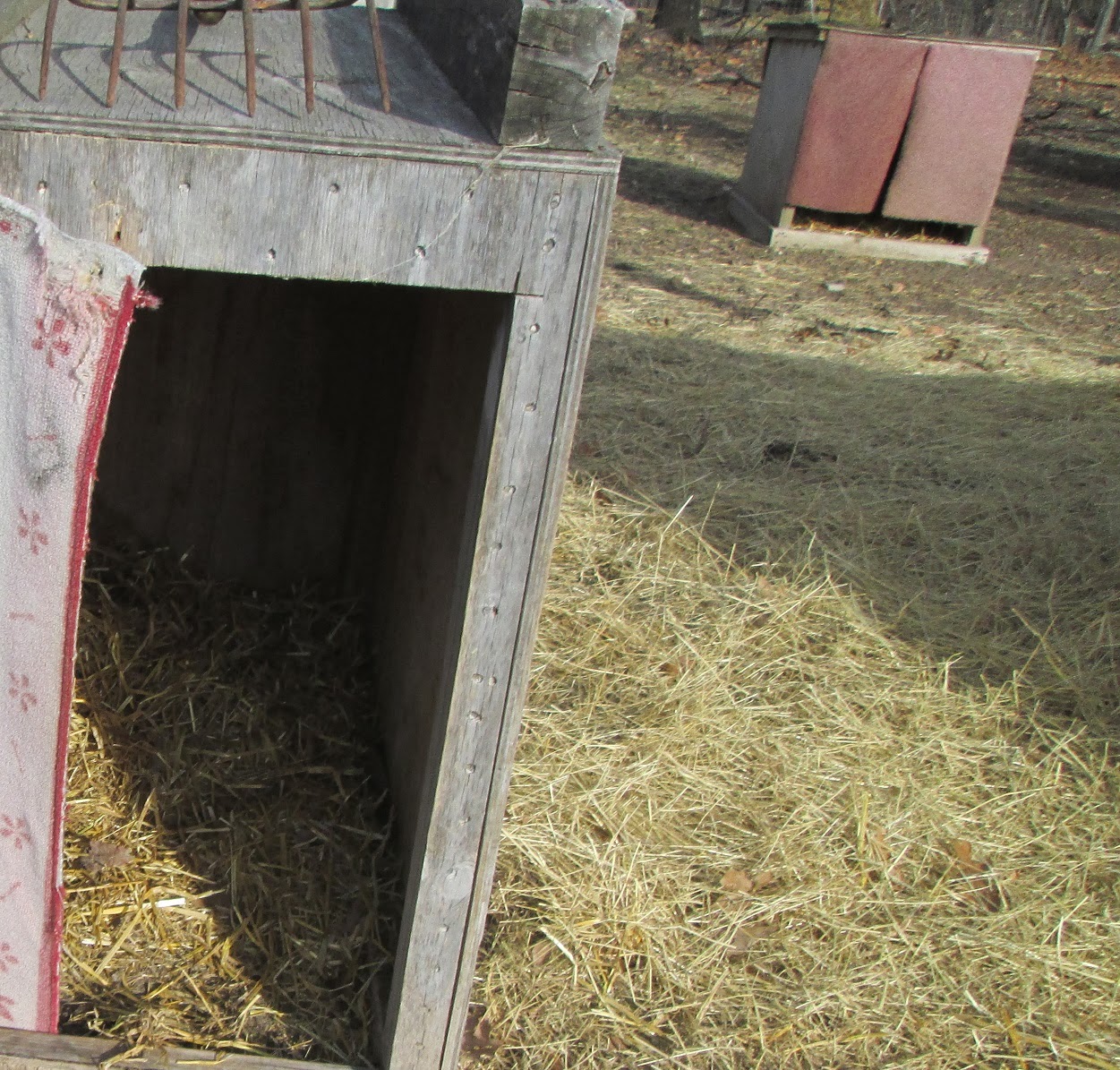 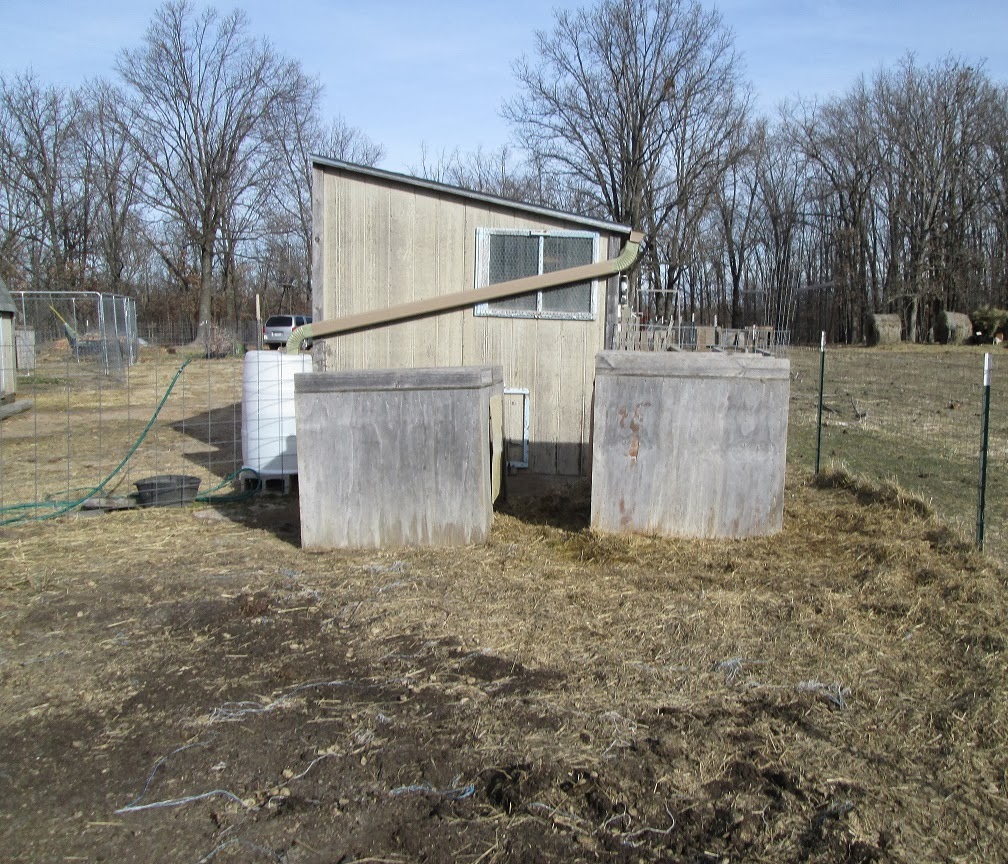 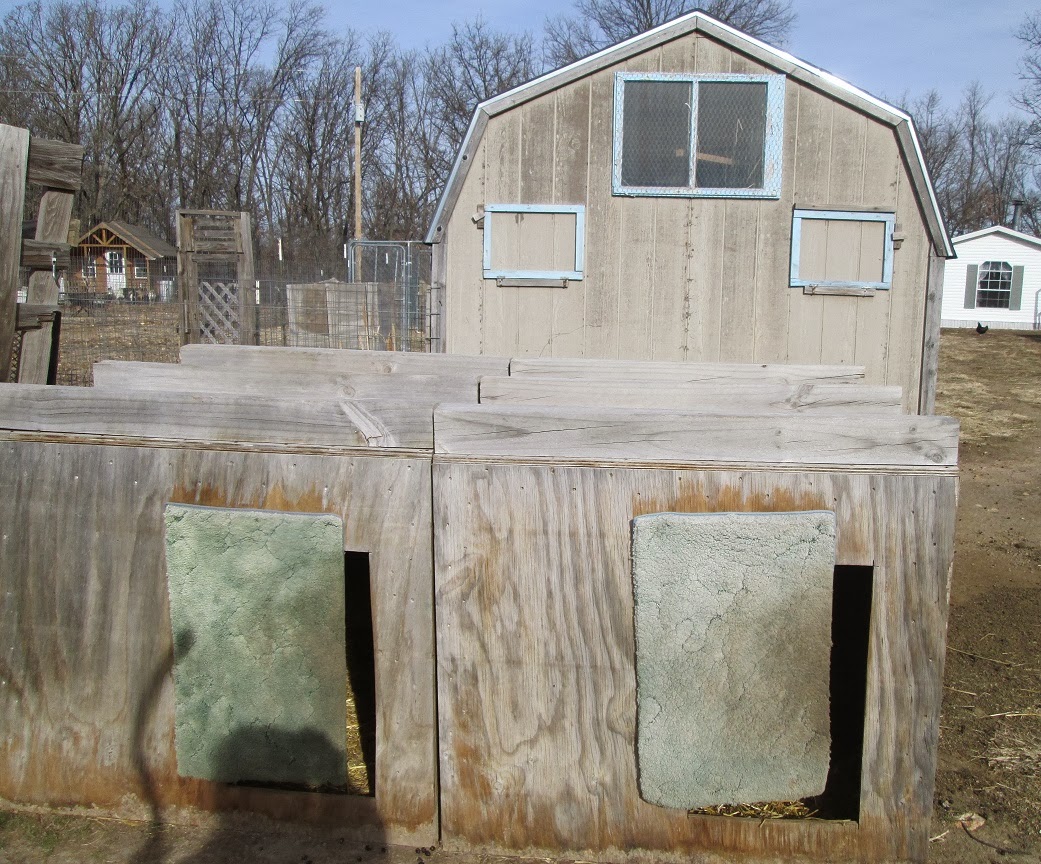 Posted by K D Elizabeth at 5:39 PM No comments: