As far as the internet goes, I've been relatively quiet.  There is a lot going on around the world, and right here on the home place, and I've had a great deal to think about.  It's certainly not all bad, not at all, but I just felt the need for some quiet contemplation, or even more basic, like I'm simply out of words.  The world wide web doesn't need my immediate reaction to anything and everything.  You know how "they" say, whoever "they" are that women speak nearly 3 times as much as men do, and the scientific research says it's because of Foxp2 protein in females.  Perhaps my level is lacking.  For the past two months, I've been speaking every week and the phone calls have increased, therefore it seems I'm simply out of words when I sit down to type.

Finally, the words are here to share an experience that both saddens and gladdens my heart.  I recently purchased a beautiful goat.  She was truly stunning! . . . As goats go.  I knew she was bred and her freshening looked to be soon, when shortly after I'd gotten her, she simply wouldn't or couldn't get up.  She was head up, eating, drinking, chewing a cud but just couldn't get her back legs to hold her.  I conferred with experts who said they'd seen it in cattle, and it was likely due to a pinched nerve from the pregnancy.  As long as she was eating and drinking, they felt, she'd probably come out of it and be fine when she kidded.  One man even told me, he'd had a cow down for nine days before she calved, and everything turned out fine.  That's not what happened . . .

Although "Princess" was head up and eating at evening chore time, the next morning, she was still head up, but I could hear the beginning of the death rattle.  As the day moved forward, I could see her failing, but she didn't seem to be in any pain.  Once I realized her death was approaching quickly, I thought of the kids.  I could see them moving in her.  I called a friend who worked on a big Oklahoma ranch and whose son is the manager of said ranch.  I told him I was losing the goat, but wanted to try to save the kids.  He said he and his wife would be right there.  As the sun was setting, Princess's breathing became very shallow and slack.  We prayed and he said we'd have one minute to make an incision after she breathed her last, and one minute to get the kids out before they drown in the amniotic fluid, and . . . he couldn't promise we'd be successful.  Of course, I was aware that, I just had to do all I could do . . . if the results were unsuccessful, I at least knew I'd done all I could.

Without graphic details, the time came, and we discovered she was pregnant with triplets.  As fast and furiously as we worked, their little lungs were already filling up.  One of the kids never did make a sound or draw a breath, but two of them did!  We dried them, we patted them, and I literally slung them over my forearm, head down, so the fluid would drain.  My friends and I were a mess.  My coat and shirt were soaked in amniotic fluid, but those two little kids were breathing!  We brought them in the house and laid them on more fresh rags, with fluid still draining.  We had them as dry as we could get them, they were warm, and I was thawing colostrum.  My friends left, saying they'd check on us all later, and I set up the "tub" which has practically become a fixture of furniture, it seems.  Wanting to keep the kids dry and clean, I decided I needed to get cleaned up before handling them, so I got them snuggled in and headed to the shower. 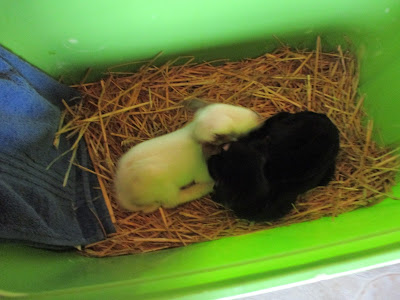 My faith was a bit wavering that evening, but they drank a couple of ounces.  I just wasn't sure what I'd awaken to, so I slept on the living room couch where I could hear them.  Sure enough, they let me know in the middle of the night, two ounces wouldn't hold them til morning.  The two little kids did survive and thrive, but I had no plans of keep them.  Their papa was not the breed I want to raise, so I was faced with the hard cold reality of homesteading.  If I wasn't going to keep them, I needed to find them a home while they were still bottle babies.  If I kept them until they were weaned, they just might end up as someone's dinner . . . 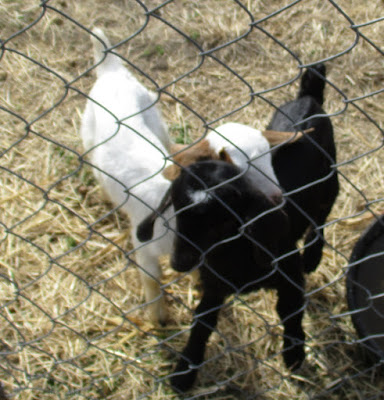 The morning of the sale I gave them their bottles, they are munching a bit of hay now, and loaded them up to be sold as bottle kids.  They won't bring the price of weaned kids, and that's just fine.  I was the only mama they ever knew and it was hard loading them, but this was the right time for them to become someone else's babies. 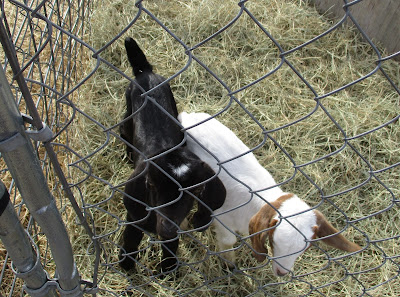 Posted by K D Elizabeth at 11:07 AM No comments: Links to this post