Words, So Many Words

I found myself making an observation that may be racist, but I think it's really more a matter of culture.  It seems nontribal people are more chatty and use a great many more words than those of us of Native heritage.  It also seems, they often expect me to do the same . . . except Mr. B.  He seems to prefer a huge wall of silence between us, and that works for me.

I'm a writer and a woman, so of course, I have a great many words that bounce through my brain regularly, but they don't all need to come out of my mouth.  As a matter of fact, the world would probably be a much calmer place if fewer words were spoken by most of us.

In the multitude of words there wanteth not sin: but he that refraineth his lips is wise.  Proverbs 10:19

Recently, I found myself in some rather oppressive conversations with more than one person, so I do have to consider the possibility of the common denominator, but there were three similarities in all the conversations.  One was, the other individual referred to me as secretive.  Two, the other individual took some comment I made and "fed" it back to me in their context.  And lastly, I was called upon to explain myself and my varying decisions and activities on matters that I simply did not believe was any of their business . . .

As I wrote this I was reminded of the similarity of Proverbs 17:28 and the quote attributed to Abraham Lincoln and/or Mark Twain.  "Even a fool, when he holdeth his peace, is counted wise: and he that shutteth his lips is esteemed a man of understanding."  "Better to remain silent and be thought a fool than to speak and to remove all doubt."

Forced conversation usually results in courteous tolerance, but rarely a true friendship.  I have discovered through the years, the people I count the dearest are those who have a great deal going on in their own lives and don't really have time to meddle in mine.  We are interested in each other's lives, but not meddlesome.  We know we can count on each other, and yet we also know there are times were are just flat busy, but we'll get back to each other.  We also know, in our absence, we're not the subject of the next conversation with someone else.  We have taken the time to know each other and enjoy who that person is, without trying to change them or make them answer for who they are. 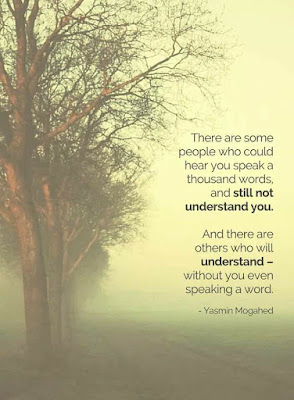