It's very easy for all of us to get caught up in plans, hurriedness, and obligations, and miss the moments . . . I'm just as guilty as anyone in my rushing through the day, but I was blessed this week with a "heads-up" on this very subject matter.

In preparing for the various things around here, from animal care, to the Goshen Gazette publication, to orders filled and shipped; not to mention my daily devotion time, and preparing for the coming tribulation . . . the day can slip into evening pretty quickly.  I've read so much preparedness advice, it's really starting to overwhelm me.  I'm not sure whether I'm more concerned about the anarchists or the survivalists!  What I do know, is I'm determined to embrace the life I've been given, and appreciate more moments.

This past week, here on the home place, I noticed several events of nature, in which I am so thankful, I took the time to notice, then to make the extra time to grab my camera to be able to share.

One morning the ice on the trees was glistening.  It truly looked like jewels were adoring all the tree tops and throughout the pasture.  My camera doesn't do the image justice, but the photographs do serve as wonderful reminders.   The photographs below are taken one day apart at about the same place, but what a difference one day made. 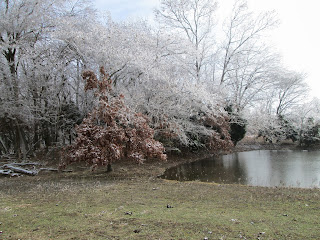 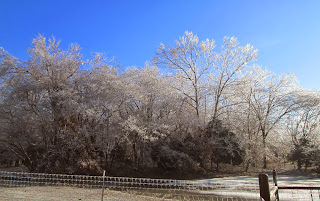 The sunlight that caused everything to be so sparkly in the morning, caused it to all fall off the trees by that same afternoon.  The ice fell from the trees like hail, only gently . . . I'd never seen or heard anything like it before. 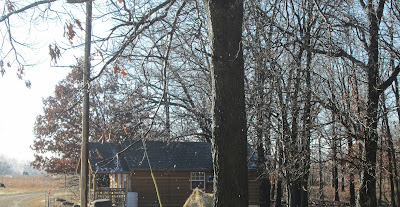 Posted by K D Elizabeth at 3:57 PM No comments:

The Community of Social Media

As I visit the news feed on social media, I see something absolutely great about this gift that we all love to hate!  We really get the opportunity to see how strong our convictions are, and those of others.  We also get to see idiosyncrasies in ourselves and others that may work great in unity or be a thorn in the flesh!  I am a socially awkward creature.  I always have been.  The very last thing I want to do is hurt someone's feelings, but sometimes I'm too direct or lack polish . . .  Sometimes I simply do not know enough about something or have enough experience to even ask an intelligent question, but the reality is, I want to know more!

There are getting to be some rather large "gatherings" on social media, but the factions are obvious.  I think that's great.  I would absolutely hate to give someone a false impression or to be given one.  I've read about people traveling across states, thinking they are going to "team up" or "community up" only to have it turn out very unpleasant for all involved.  What a blessing it is to have this segue opportunity!  Knowing I'm an odd duck, helps me to realize, everyone who isn't on all my pages is not necessarily wrong!  I'm so sad to see how many other "odd ducks" seem oblivious to this fact to which I've been illuminated.

YHWH did not use a cookie cutter when He made humanity!  I've even considered the idea that as the omnipotent Creator, maybe He simply never does the exact same thing, twice.  Maybe he's just too creative to repeat . . . That's not doctrine, just a thought!  At any rate, I've taken the bait a few times on social media, only to find I need to choose my words very carefully, in that I have always relied heavily on my eyes and facial expressions to add clarity to my often awkward words.  Eye contact does not exist in social media.  Even with skype, there is time delay . . .

I would urge you as we have been afforded the blessing of social media, and the prophecy of Daniel 12 is being fulfilled that "knowledge shall be increased."  Social media also affords us the opportunity to see where information is being rejected.  None of us know it all!  One of the first big red flags would be for those who insist their "opinion" is somehow, etched in stone.  Several of us are considering the idea that this next year may truly be the year of upheaval and scrambling.

If you are suddenly faced with chaos, what will you do?  I'm not proclaiming any more gloom and doom than the right wing anti-Obamacare representatives or the left-wing "where's the job creation" representatives!  We may find ourselves facing those who are impoverished but have lived entitled, there could be mocking marauders, aggressive anarchists, and those who have not prepared but determine your preparedness is their "blessed manna."

In the midst of turmoil we still have the commandment to love our enemies.  What are the tenets of faith, we will not compromise, as we attempt to be obedient?  I'm still seeking . . .
Posted by K D Elizabeth at 2:35 AM No comments:

More homesteads are being established, more Americans are heading for simpler sustainability, and many have the goal of going off the grid.  With that in mind, there are also many of us who have either been led to begin the foundational work for communities to gather and some who are seeing the need to "community up" in the near future.  As I read the predictions and time lines of the official beginning of the time of tribulation, I honestly do not know where we are in the end of days.  What I do know, is; I haven't been told to stop preparing and I've not heard that I'm ready for what will be coming in the end of days.

There are several folks sharing information about what they are doing toward self-sustainability, but in that there have also been a number of disagreements about basic tenets of faith, that indicate the body of Messiah isn't quite ready for unity yet.  I've developed a theory about what it will take for unity, as I've also had my bumps in the road with folks looking to be a part of this particular "preservation."

First, I think we are all still way to comfortable in our own knowledge.  It seems many of us have already forgotten how much our beliefs have changed in the last decade or less.  We also have the idea we can completely change our understanding, yet we are still clinging to old foundational perspectives.  If we've only come into the truth in the last five or six years, there is no way we can be mature beyond that.  That's not to say, the Great Spirit of our Creator cannot change us immediately to operate in us and teach us, but most of us still have more to "let go of" or unlearn.

I've been in discussions in which we all thankfully agreed to not discuss new month from dark of the moon to sliver through that approximate four day period, and there are those who insist upon lunar Sabbaths and spring equinox, and I almost forgot, the full moon/new month people.  There are folks who insist the seventh day of YHWH's calendar should not be in sync with the Gregorian calendar at all.  Then there are the "sunrise is day" folks vs. the 24 hour day folks with the day beginning at sunset.  Oh, and I almost forgot the whole spelling and pronunciation debate of the proper Name of our Creator.  I do believe we are to acknowledge His Name in the Hebrew, but without vowels, He knows we are calling upon His Name as respectfully as we know how.  I prefer to leave the presumption out of it and just speak the letters.  I've even experienced, although briefly, the debates regarding the proper "doneness" of meat and what is correct . . . then there's the interpretation of meat and milk in the same meal.

I'm guessing when the troubles really intensify, meat may not even be an issue, and milk will probably be for the children only.  We'll be too busy surviving to be constantly debating, and there will probably be different groups who do unite with the same convictions about new moon, length of day, etc.  I feel certain that at some point in the end of days, the people of Shaddai will find the actual enemy a bigger target than each other, and will hold Psalm 133 as a blessed privilege of which to be a part.  As I read Scripture, I see over and over, it was tough times and persecution that really rallied the communal lifestyle and caring for each other.  YHWH even told the children of Israel, when they came into the Promised Land and enjoyed the goodness, they would forget Him.

Although I'm pretty dismissive of those who are collecting all this knowledge and plan to pick up manna, it would be nice to see some manna fall, just to resolve the seventh day issue once and for all!
It is my guess, when we are enduring the times of tribulation, we'll see a real convergence of togetherness and the luxuries that cause the issues between us now, will probably not even be attainable.

To be in one accord regarding Messiah, and our willingness to be obedient to Torah, we will at some point come together in like groups.  Until Messiah returns, I believe the dark moon folks will find their way to each other, the equinoxians will gather, and the sliver folk will have their places of refuge, but the seventh day will have to be agreed upon, because the working of anyone is forbidden on Sabbath, so if Sabbath is not agreed upon, we would be causing each other to be in disobedience.

A Song of degrees of David. Behold, how good and how pleasant it is for brethren to dwell together in unity!

Posted by K D Elizabeth at 1:07 PM No comments: