For those who have not already sorted through this, we are about to discover the difference between legal, biological, and spiritual family.  In these last days, it will be our spiritual family that we will count on and will need to be able to count on us.  I'm truly hoping to be able to assist many people through this coming time of difficulty, but when choices must be made, it will be spiritual family first.  I'm being honest about my stand before the difficulties begin.  I'll also add this.  I pray that those to whom we are related in the natural will see the truth.

The simple fact of the matter is, the line in the sand is widening . . . to the point of a chasm in some issues, and natural families are divided on the issues.  Actually, the spiritual family is still pretty divided on a number of issues as well, but that will change.  As the persecution intensifies, the common enemy will more than likely cause us to need to unite.  The minor differences will pale in comparison to the all out persecution we will be facing.   Sadly, Messiah stated natural families will actually become enemies toward the remnant.  This is where some of us have had to seriously evaluate life.

Not all of our natural family are enemies, but biological and/or legal relationships are simply not always connected spiritually.  "If you're not for us you're against us" feeds the "enemy" mentality, and sadly that is the place to which our society has arrived and defined to be "proper."  In my case, if anyone is willing to choose a political candidate and seek mainstream medical advice, we are not on the "same page;" which is usually interpreted to be opposing.  Some folks are confrontational about it, while with others; we simply agree to disagree and hopefully focus on other matters.

I would do anything I could for my physical family, except . . . compromise my call of service to YHWH.  There are three reasons for that.  One, I don't want to lose my salvation . . . Two, if I lose the blessing of the covenant, I have nothing to offer anyone, anyway . . . and Three, I already tried it once, hoping to come to an understanding.  Here is the understanding to which I have now arrived.  When someone comes here demanding compromise, that really means concession on my part, so NO, the answer is simply, I shall not be moved.  I do not have the ability or capability to provide salvation for anyone, only to introduce them to the One Who saves.  YHWH does not have friends of friends, in-laws, or grandchildren.  He has children . . .  We must each have our own relationship with our Creator through His Son.

As these end of days continue to unfold, obedient Bible believers will be called extremists.  With a global economy on the rise and Agenda 2030 being rolled out, life is likely to become quite difficult on the remnant.


Posted by K D Elizabeth at 12:43 PM No comments: Links to this post

Spiritual readiness, to me, also includes a manifestation of faith in the natural.  There are many theories and teachings about this, and the level of preparedness covers quite a gambit of what is preparation, what is lack of faith, and what is head in the sand, and what is just over the top and fringy.  I believe spiritual preparedness is the number one priority, and by that I mean not lagging behind or getting ahead of Abba, but staying in His presence and praying without ceasing.  In seeking Him, I've been led to do some practical preparation, as well.  Some have called that lack of faith, some believe I haven't done enough.  I like to think I've struck a balance, but then, don't we all . . .

When I heard Abba tell me, in the spring of last year to prepare practically for the purpose, I took it quite seriously.  Some of the preparation seemed still a bit of trial and error, while other efforts have landed smoothly in place.  I've had a bit of trouble with practicality and goats, as I pretty much like them all, but I have done some maturing in this area in the past year . . .  I bought one, a beautiful Oberhasli doe with a great udder.  She led beautifully, jumped up on the stanchion and kicked and stomped for nearly a month.  It usually takes three days to "break" a milk goat that has never seen a stanchion.  My pride wanted to win this one, but she was taking valuable time and eating organic grain, only to have milk slung around the milking parlor . . . I wasn't about to try to sell her as a milk goat, nor was I going to waste any more energy and expense.  She went to the auction, ran through the ring, displaying her "high spirited self" and glory to YHWH, still brought more than I paid for her.  I've broke two goats this year, and they've done beautifully, still are, as a matter of fact. 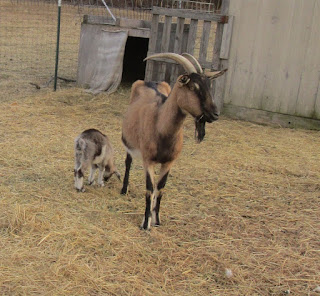 Thursday morning, I loaded another big doe that I'd also had on the stanchion and milked, but she was too aggressive with some of the rest of the herd, so she also had to go.  She was beautiful! 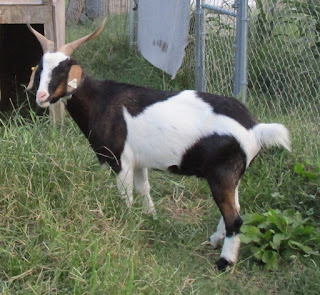 Loading her was no simple task . . .  Her horns were as wide as the pen gate and I'm still not sure what she weighed.  In taking her to the auction, I decided to check out what might be for sale that evening.  I purchased the biggest most amazing Oberhasli buck, after buying a couple of young does.  The young does should milk train nicely next spring, and Big Leroy is docile.  Considering the fact, it is breeding season, he is very well behaved.  From a practical perspective, YHWH willing; all of next year's kids will be half Oberhasli, a very good dairy breed. 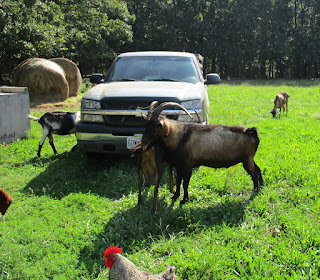 Having run into some friends who also "unexpectedly" bought a goat, knowing I would now be making a second trip back to bring home the buck, I offered to pick their purchase up as well.  Between night highway construction, hooking up the trailer in the dark, and making it "big buck tight," it proved to be a pretty long night.  I got the two young does unloaded and did the milking before heading back to the auction.  Got loaded out with my big buck who was positively enamoured with my friend's doe.  Hit the road heading for the OK line about 10pm with the trailer rocking all the way . . . By the time we got the doe unloaded and headed toward Goshen it was after 11.  Leroy was unloaded and chores completed a little after midnight.

As I gathered some leftovers together for Mr. B's dinner and poured a glass of red wine, I contemplated the day. A brood of chicks in a tub in the guest room, one goat loaded out early that morning, a stop at my computer guy's so I can "work from home," three new goats, with a fourth delivery, milking at dusk, chores at midnight. It was official, 1:15 am Friday morning, I was officially "farmed out!"

Friday sunrise, was a new morning!  There's something about, even an exhausting day on the farm.  I could get up the next morning and see the evidence of all the hard work and long hours!  Ready to hit the ground running on Preparation Day, I was no longer "farmed out."

It is of YHWH's mercies that we are not consumed, because His compassions fail not.  They are new every morning: great is thy faithfulness.  YHWH is my portion, saith my soul; therefore will I hope in Him.   Lamentations 3:22-24

Posted by K D Elizabeth at 3:41 PM No comments: Links to this post