Is This the Reason for Native American Exemption?

I realize some may decide to consider this post racist, and that is their prerogative, but the simple fact is, our nation is very racially divided right now, and it's "acceptable" for someone to be for someone or something simply because they are of the same dark skin, but that in reverse is not politically correct.  I've made no bones about being brown, and I've shared many posts with a clearly ethnic bias, but truth of the matter is, white guys have it pretty rough right now.

If they disagree with women, they can be accused of being misogynists.  If they are openly heterosexual and stand on Bible beliefs, they are called homophobic.  If these white gentlemen disagree with our current administration, they are racist, and if they are against government programs, they are bigoted.  I'm very glad to be a brown woman in this particular time in history, and feel sorry for the white men who are taking the brunt of old grudges that they personally did not cause.

I do not expect every white Christian to agree with my views of early America.  Why should they?   I also don't expect them to try to change my views, but as we launch into Thanksgiving season, I'm going to just give this a rest . . . My point is, America is becoming more segregated by religion, by skin color, and by politics, and it would seem now, by health care as well.

Well, I don't want Obamacare, I don't want modern European medical advances, and I don't care for any preventative testing.  I happen to think my Jewish healer is awesome and if that makes me politically incorrect, I really don't care.  Rumor is, he's brown skinned as well, and by all accounts lived rather communally according to Torah!

I now have two greenhouses.  I'd like to share how that has come about and offer what encouragement I can to those who are considering a bit more self-sustainability.  Actually, raising our own food, isn't self-sufficiency or self-sustaining as much as it's the original plan of our Creator, therefore our sufficiency is of G-d.  It's only been in the last 100 years that we got away from that plan.  For centuries, even those businessmen in towns were utterly dependent upon their bartered trade of produce and meat.  Making a living is about providing food and shelter, rather than just making money.  The transition has resulted in this:  http://news.stlpublicradio.org/post/hunger-rise-missouri-how-can-we-reverse-trend#.UmFPeloJVZw.twitter

The first photo was taken at the first homestead, EinGedi.  It was my starter place.  On just under two acres, I had enough pasture to provide most of my dairy and eggs, as well as meat and chicken in the freezer.  I also had a garden that was a little less than 1000 square feet.  This garden provided me with more than enough vegetables to eat fresh, give away, and can.  Since I began homesteading, my kids have adopted the "returnable jar" plan.  If they return the empties, they can shop in the fruit cellar! 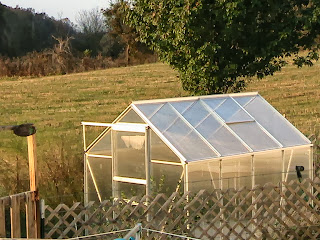 I've tried various things in my years of working with a green house.  I am not really gifted with a "green thumb" so I have to learn and work at it!  The reason I've share a photo from the old place, is this green house was moved to the new place.  These are nice little sturdy buildings that snap together quickly and easily.  I don't take it down through the summer or anything, but for about $300.00 it's a nice investment, even in the case of a move. 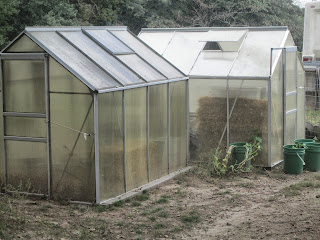 I don't use any electricity in my greenhouses.  In one, I use candles, and the other water.  The one I heat with candles, cannot have the added straw insulation, so I've juggled and struggled to find the "perfect" balance to hopefully, this year, have fresh produce all winter.  The one I heat with water won't hold as many pots and plants, since it contains a 100 gallon water tank.  Bear with me, I am going to make a point, as to how I came to have two greenhouses, rather than one large one.  These greenhouses are identical 6' X 8' with a 7' peak.  So although we are only looking at 48 square feet, shelving doubles and in the case of shorter plants, even triples the potential space.  The walls are 4' so basically you have 192 cubic feet of potential.  The next size greenhouse was 10' X 12" and over 10' tall, with the sides 8' tall.  That is 120 square feet of floor space and 960 cubic feet for nearly 3 times the price.  Financially, it's a toss up, actually, but for me it was the practical aspect of maintaining heat.  Heat rises, and the larger greenhouse would best accommodate shelving taller than I could reach, since that's where most of the heat would be.  Even at 5'7," I opted for keeping it close to the ground!

Right now, these greenhouses are less than $300.00 and if you eat healthy and can have any sort of outdoor structure, it might be worth considering.  These are structured nicely and so far, the one has provided me with not only some fresh produce through the winter, but a place to start all my garden bedding plants in the early spring.

I'll be including photos through the winter . . . It looks like we may get a real test this year, both economically, and weather wise.

Posted by K D Elizabeth at 5:15 PM No comments:

I just cannot help but notice the incredible timing and I don't believe in coincidence.  I'm not going to belabor the point because I truly believe the Word of YHWH has already confirmed it.  Our government closed through the same week of the reading of Noah.  I just couldn't help but take note of the fact that YHWH closed the door on the ark.  Y'hshuwah said the end of days would be as in the days of Noah.

Even if the government re-opens claiming business as usual, we know it isn't.  Trust is an issue or lack thereof, and if the debt ceiling is raised  . . .AGAIN, it's only a temporary fix.  Which takes us back to problem number one, the continued lack of trust.  I know many would disagree with me regarding our current President, I do not think he's THE anti-Christ, although he does come across as rather self-worshipful.

That was my opinion . . . Back to the Torah portions.  The very next Torah portion, after Noah, was entitled, "Get yourself out," the call to Abraham.  I realize these Torah portions go in this direction every year, but we haven't ever had a summer of rainbow pride flags waving at the Supreme Court, nor have we experienced so much lack and despair in this country while calling it "recovery."

Clearly the passage in Isaiah 5:20 is coming to pass, and we are beginning to realize the "Woe."  Although I do still believe individuals with ears to hear can still receive the covenant message offered by our Creator, I have no doubt the door is closed for national recovery.  As for getting ourselves out, I don't believe that is removal from our country, per se, although I can't speak for everyone.  I understand this "get yourself out" to be more of spiritual setting apart and a physical removal of dependence upon man-made failing solutions.

Seems all the government extensions of help and assistance are coming to an end, and we already know where debt leads everyone.  There was a time when a loan was obtained for something of tangible value.  When the loan was paid in full, there was something to show for it, but that all changed, and now clearly this debt is only going toward deeper debt and future slavery.

An Answer to the Sabbath Question

So often, the concern about what to do and what not to do on Sabbath becomes a point of discussion.  A young woman just the other day was concerned that she had broken Sabbath to take care of an unforeseeable emergency.  I've been thinking about her dilemma since.  I believe I gave her a response based on Scriptural that encouraged her to not entertain any condemnation for what she did.

I don't believe it brings any glory to our Creator to leave anyone or anything in harm's way because it's Shabbat.  As I pondered this situation, of course my mind wandered to the idea of community and how nice it would be to have a "pantry" for Shabbat emergencies, especially since Messiah specified the fleeing of the end of days that we should pray it not be Shabbat or winter . . .

It was at this point, I looked out an east window and saw the strangest sight.  Now, this was a Wednesday morning, not Shabbat, but even if it had been, I would not have waited until sunset.  It just wasn't appropriate to take a "before" photo, but I have included the "after." 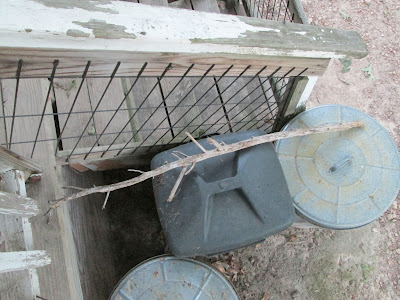 The cedar branch in the photograph had somehow become caught in one of the bull's halter.   I keep feed in these standard sized trash containers, and it is clearly longer than my steps.  I'd guess about 4 1/2 feet long.  When I saw him by the fence, I went rushing out back.  He met me at the fence, as if to say, "Help!"  I tried to pull it, but it wasn't budging.  I was going to head out to the pasture to tend to him, when the idea hit me that I would need a way to brace myself for this endeavor and the calf was definitely getting in a bad place over this stick.

I attempted to use the fence for leverage, to hasten this deliverance.  This poor calf seemed near panic.  It took about 10 minutes to free him, which probably seemed an eternity to him.  What happened next truly confirmed my point.  The moment he was free, as I was trying to straighten his halter, he appeared literally driven to walk away from me.  He was heading with urgency to the water tub!

He had not been able to get a drink with that stick wedged as it was.  I have no idea how long he'd been in that situation.  He was grazing peacefully when I made my rounds at morning chores, but it had been long enough, he spent some serious time at that water tub, once he gained access.  As I said, this was not Shabbat, but if it had been, I wouldn't have done anything differently.

And he said unto them, What man shall there be among you, that shall have one sheep, and if it fall into a pit on the Sabbath day, will he not lay hold on it, and lift it out?  How much then is a man better than a sheep? Wherefore it is lawful to do well on the Sabbath days. - words of Messiah
Posted by K D Elizabeth at 5:20 PM No comments: